Google+YouTubeInstagramTwitterFacebook
Recently I worked in a soccer coaching session with a group of players from Poland where there were 15 players of mixed ability, gender and age. The age range of the players was 9-18, with some of the better players being on the brink of Academy football in Poland. This multi ability/age can be a real challenge for any coach to ensure maximum learning potential for all participants. Fortunately I have over 10 years of experience as a football coach plus 5 years of teaching in a primary school classroom so have become accustomed to differentiation in sessions. 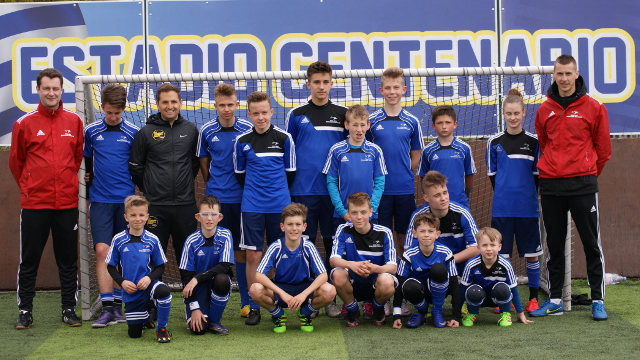 Having a group outcome is key but understanding that each player may get different things from the session and some may need extra stretching and others more support must be catered for. This particular 2 hour session was going to be a technical session with 1v1 Ronaldo play the focus. The session was split into two halves with the first half focused on ball mastery and practices and the second half split into various small sided games (SSG’s) and a final game for all.
First Half – Ball Mastery & Warm Up (20 minutes)
The challenge for us coaches is what does this look like in practice? Well it’s actually easier than you may have imagined. A key part of my coaching philosophy is keeping the ball to player ratios down. I always start my session with 1 ball each because this is a vital time to build a players relationship with the ball plus an added advantage is that it is an ideal way to warm the body up. I went through several different ball mastery exercises and because of the mixed age of the players I tied in some intermittent dynamic stretching. 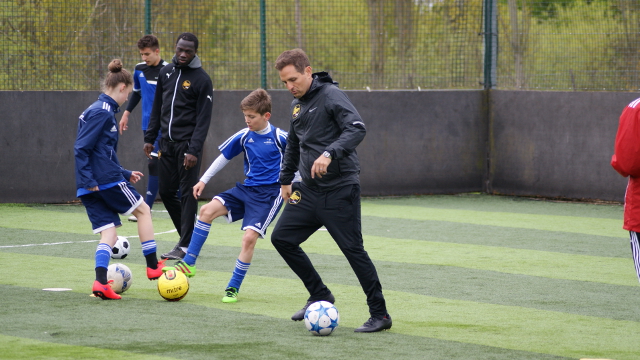 This initial part of the session is your first opportunity to see who needs stretching and who needs support. Don’t fall into the trap of just stepping back and observing. Ball mastery is not just about players learning with the ball but importantly it’s stretching their movement patterns with the ball. It helps to ask these key questions,

This initial part of the session sets the tempo, it should be fast, dynamic and challenging for all.

An example of ball mastery techniques practiced with the players.

First Half – Pass, move, interference with passive 1v1 (20 minutes)
I then progressed the session into one ball between two players with each one encouraged to pass and move around the pitch. This is a great opportunity to get the repetition work for passing and because the players are all moving autonomously, it adds interference and thus makes it more challenging. To start off with I let players move all around the 7 a side pitch, then I later progressed it into half the pitch, to make it more challenging. I think this changing of environment is really important as this constantly adds to the challenge for the players to adjust themselves to smaller, tighter spaces. During this practice I asked them to try different receiving skills, continuing the ball mastery theme. 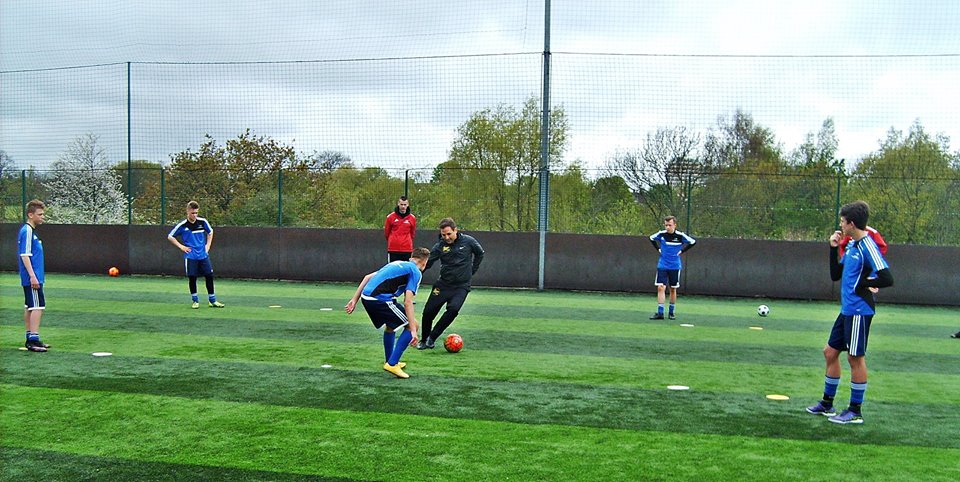 The final part of this stage was to challenge them to pass and then dribble and take on their passively defending partner with some 1v1 skills. Now passive defending is often criticised in some coaching circles, I however have seen the benefit for young players particularly when learning new 1v1 skills as it helps to master and refine the technique. It’s imperative that the passive defender is side on and jockeying and not planted and static so that it’s more game realistic. This movement as the player drives towards them adds the real challenge and benefit to the player, as they explore the movement and experiment with the timing.
First Half – 1v1 group work (30 minutes)
I quickly then progressed this into groups of 3 with 2 balls. Before the session I had marked out the pitch with flats. 5 channels or rectangles across the pitch side by side. These were 12×20 and would allow me to manage the group of 15 for much of the session.

The first practice for 3 players was a simple rotation drill, combining passing, dribbling, receiving and 1v1. Check out the video below to see it in practice.

SHOW IMAGE OF CHANNELS AND PLAYER POSITIONS WITH ARROWS AND DIRECTIONS

2 players at each end of the channel with a ball, 1 player in the middle without a ball. One player with a ball passes to player in the middle then passively defends, the middle player dribbles at speed and tries to beat player with 1v1 skill, here we are working on the Ronaldo step over. As soon as player crosses the far line the defender becomes an attacker, with the player on the opposite line passing immediately. A key point here is the need to encourage players to play as quickly as possible because without tempo this practice will yield less results. The other defender once beaten does the same again becoming the attacker. The full rotation can be seen above.

I would recommend having passive defenders for 4-5 minutes and then progress to the defenders being live, if the attacker gets over the line they get a point. If the defender wins it they get a bonus point.

I then progressed the practice to an alternate 1v1 practice. As previously stated I don’t like players doing one activity for too long as it can become stale or boring and when this happens we have lost the players focus and attention.

The final practice of the half was a 1v1 opposed rotation practice which has the added benefit of a passing combination before the 1v1.

SHOW IMAGE OF CHANNELS AND PLAYER POSITIONS WITH ARROWS AND DIRECTIONS

Players again in a three, set out similar to before however this time there is only one ball. The player at top of the channel with the ball is the defender. The player in the middle (the midfielder) checks out to make pitch big and create and angle to receive from the defender. He immediately passes to the player at the top of the channel who is the attacker. The attacker plays a 1-2 with the midfielder and then is in a live 1v1 against the defender. If the attacker gets across the line they get 1 point, if the defender wins the ball they can pass if to the midfielder (who has now moved to top of channel) for a bonus point. The players all then rotate positions. Defender becomes midfielder, midfielder attacker and attacker defender.
Second half – SSG’s and final match (50 minutes)
The second half of the session was all SSG’s starting off with a 4v4 and a 3v4. Here was another opportunity to differentiate, trying to pick the right players to have competitive games. This was a combination of having most of the younger players in the same game or similar sized players. The games were as ever free play, although I was giving bonus points for successful 1v1 skills during games, encouraging players to have a go and take a chance! It’s vital that players are empowered to be creative and make decisions without fear.

The last part of the session was to utilise the whole pitch and have a 7v7 game plus a magic man or a 8v7. This was the only time that all players were together but I tried to balance the teams as much as possible. The attitude of the older players towards the younger players was excellent and this is something as a coach that we have to monitor but I trusted in them to do this and they didn’t let me down.
Feedback at the end of the session was very good, but the most important part for me was that I saw lots of positive 1v1 play during the games. The players showcased the skills we had practised as well as some of their own which was really encouraging. In terms of a technical session, the soccer players had an excellent number of quality touches of the ball and lots of time to express themselves on it.

Take your game to the next level